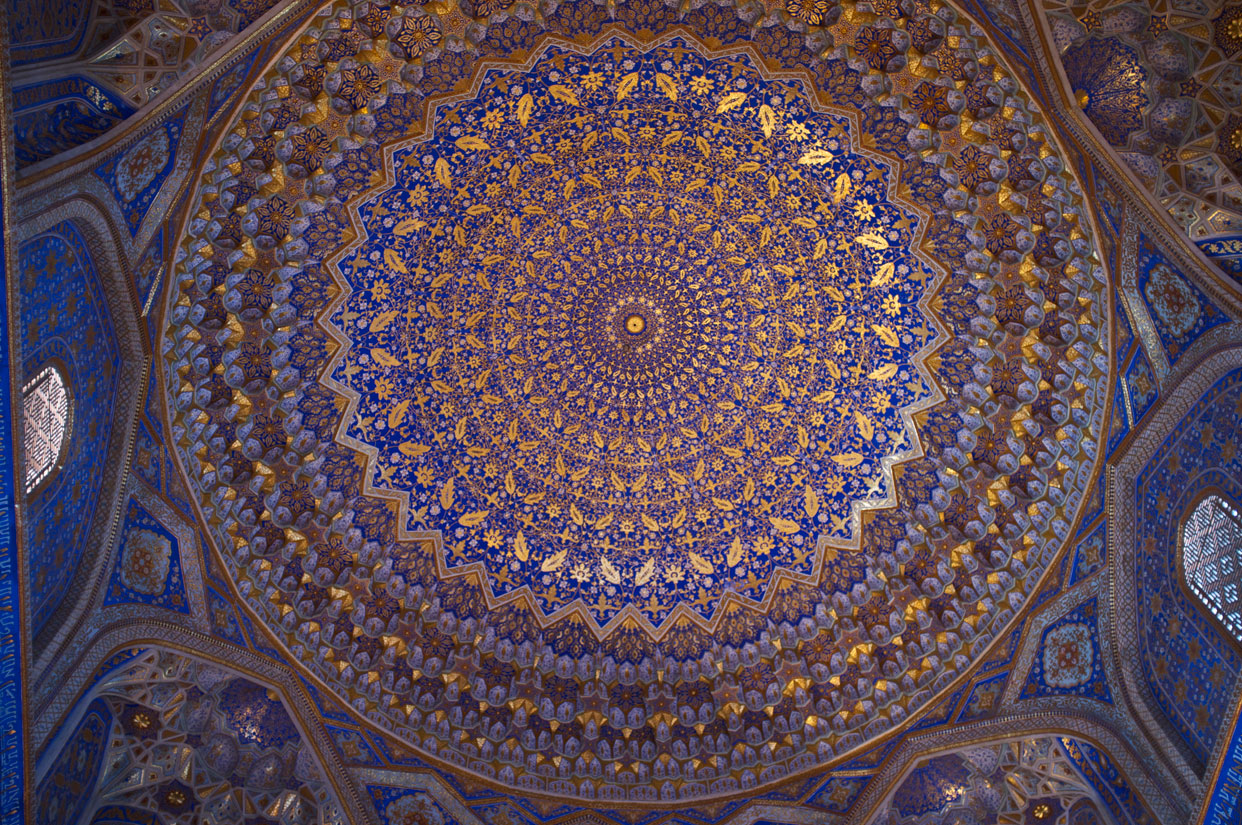 psychedelic ceilings inside the 16th century mosques at the registan in the world heritage city of samarkand, uzbekistan. photo: aleksandr zykov

Standing amidst the massive, intricately mosaicked mosques that line the central square of the Registan in the provincial capital of Samarkand, Uzbekistan, you could easily be forgiven

for thinking you had somehow been transported back to the 17th century… after all, not much here has changed.

For thousands of years, Samarkand was one of the most important cities in the world—literally sitting at the fulcrum point between China and the West on the legendary silk road. A UNESCO world heritage site, the city was (and still is) a melting pot of Asian cultures, each adding their unique flavor over the centuries, giving it a fascinating and rich history that draws savvy travelers from around the world. 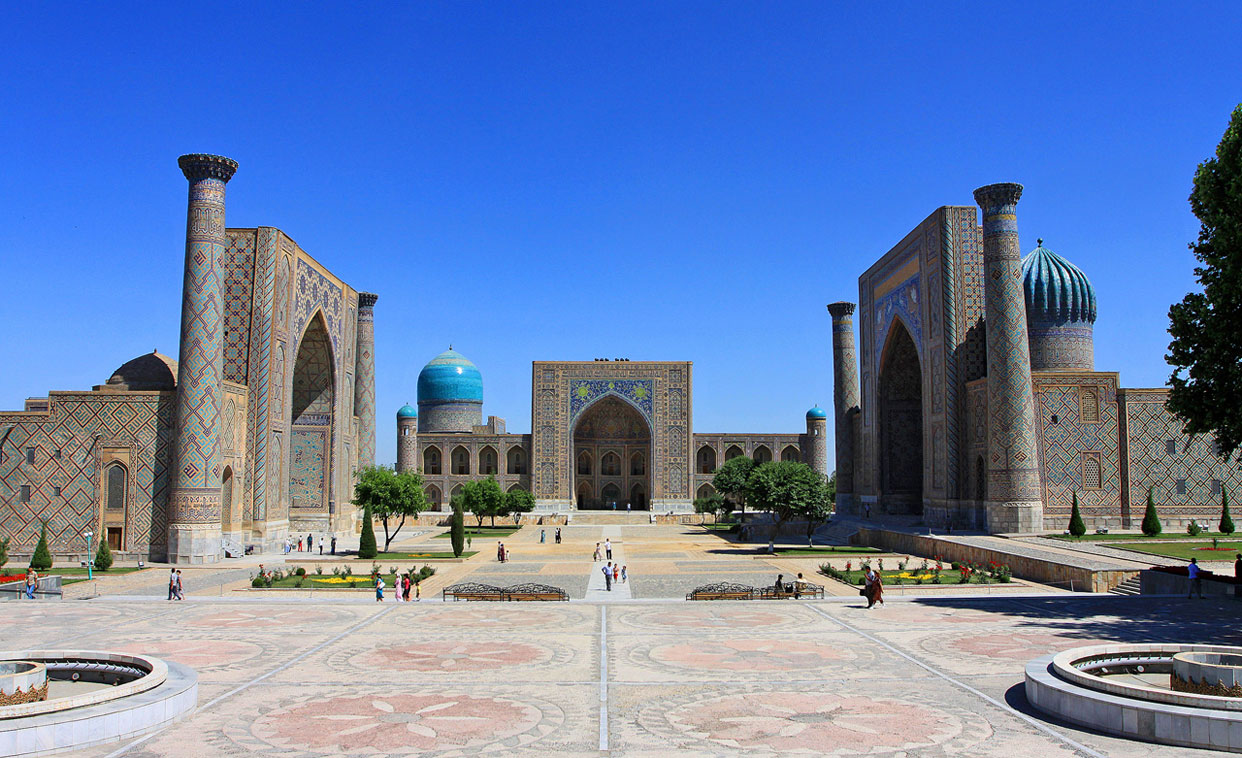 It’s far off the beaten path. Really far… but those bold enough to make the trip out will be rewarded with a plethora of some the most stunning architectural works and exotic ancient ruins the world has to offer. This is a city to let yourself get lost in the spectacular history of it all, to soak up the rich and downright quirky culture of a place that thrives in the heart of Central Asia.

If you find yourself in the area, the Registan and the Shah-i-Zinda mausoleums are not to be missed. The intricately tiled facades and mind-bending geometric patterns that permeate every level of the two sites, from the minutiae to the grandiose, evoke the mystical overtones that seem to permeate many areas of the city. If you time your visit just right, you can find these places pretty much deserted, which is a humbling experience in and of itself. 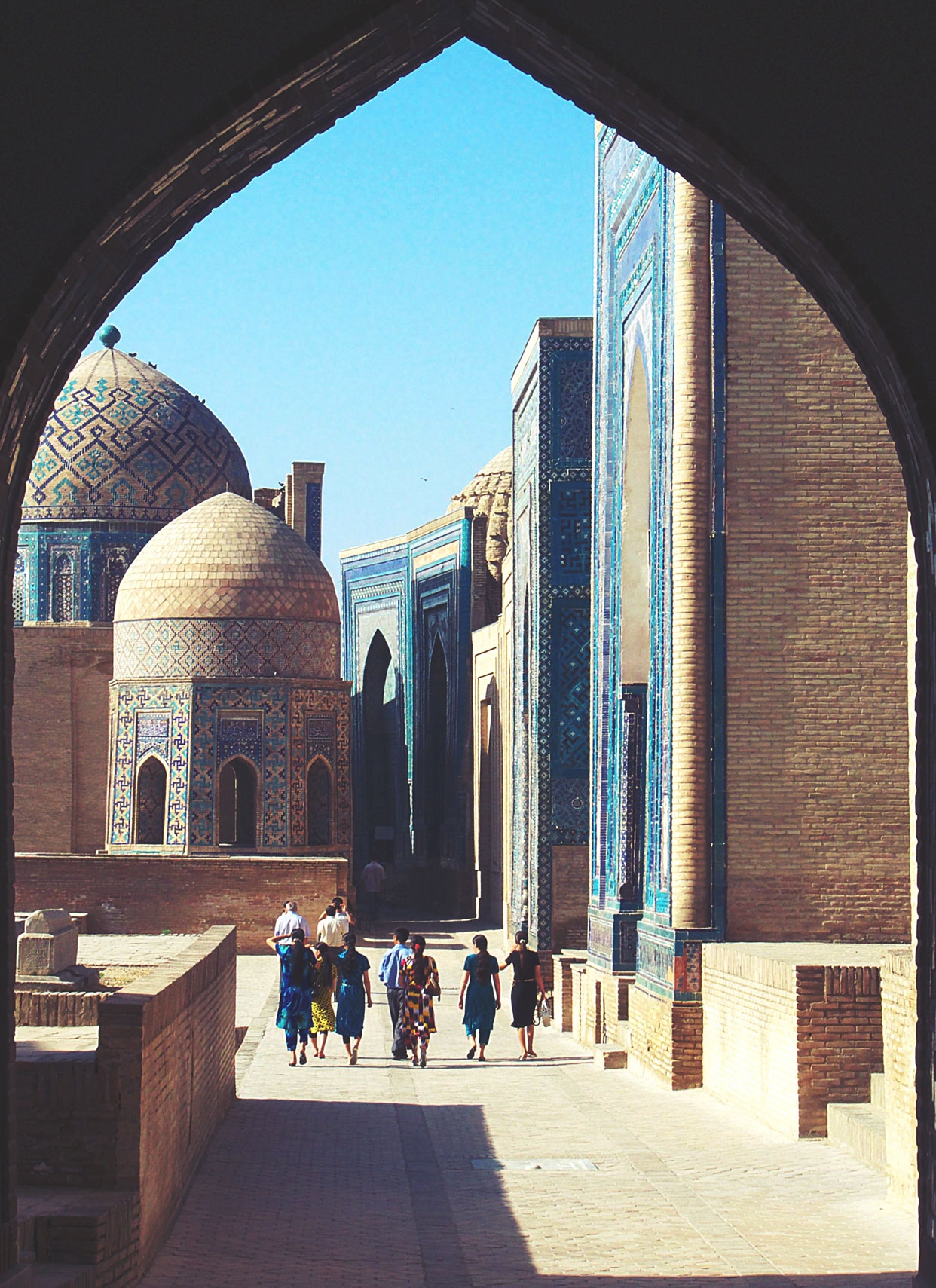 Samarkand is also home to many unique historical artifacts from the ancient arts and sciences—the most impressive of which is Ulugbek’s observatory. Ulugbek was one of the world’s most celebrated ancient astronomers whose research greatly advanced the field. As such, his work commanded the proper tools, and he had a truly magnificent, fairytale-esque observatory erected for his personal use, featuring a massive, marble-lined sextant that extends for hundreds of yards in a deep underground tunnel. Only recently excavated by Soviet archaeologists, this well-preserved ruin is one of the few ancient observatories still standing worldwide and is very much worth visiting.

After a long day of sightseeing, be sure to unwind in any of the city’s many banyas—traditional spas that offer Samarkand-style deep tissue massage.

Uzbeks are very friendly on the whole; however, they are also notoriously good hagglers, a side of them that you can experience firsthand in the city’s old-world style bazaar. The hustle and bustle can be overwhelming at times, but it more than compensates with exotic smells, tastes and sights. Here you can find truly gorgeous, handmade regional crafts at… well, whatever price you can bargain for. It’s also home to some fantastic restaurants and food stalls, which serve up fresh local cuisine amidst the throngs of Samarkandi people going about their lives.

If you’re headed to the area, be sure to pick up a good travel guide, as the Internet is still catching on in this part of the world—English as well… but it’s exactly that kind of juxtaposition with modern global culture that makes it such a fascinating place to visit.

The 10 Most Spectacular Things to Do in Banff: A Nature Lovers Guide to Canada's Most Beautiful National Park
Transformation in the Jungle: The Wild, Enlightening Experience of Envision Festival
Conscious Croatia: Exploring The Coastal, Island Paradise of Southern Europe
4 Life-Changing Conscious Events to Make 2016 The Best Year of Your Life
The Conscious Travelers Guide to Israel: A Journey Through the Holy Land
The Healing Springs of Budapest: Eastern Europe's Best Kept Secret
Share:

How to Master the Art of Meditation: A Complete Guide to the 10 Stages of Meditative Development 206711 views

Treating Candida Naturally: The Top 17 Most Powerful Natural Antifungal Supplements and Herbs for Ridding the Body of Yeast 183467 views

Conscious Travel Guide Iceland: What to Do and See at the Edge of the World