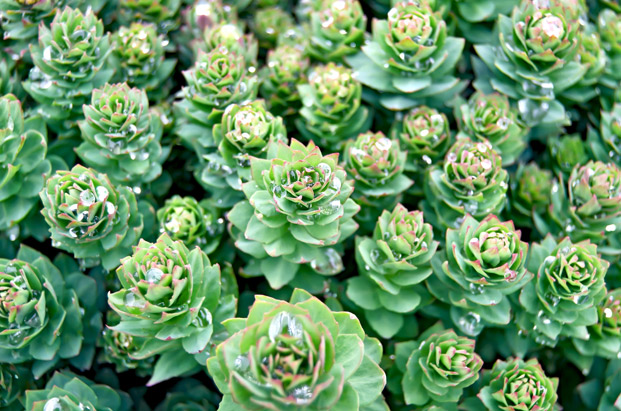 In Chinese and Ayurvedic medicine, how and where a plant grows often speaks volumes about its inherent medicinal properties. For example, root vegetables like potatoes and radishes are known to be grounding—literally speaking they grow deep in the soil—and energetically they

keep our minds focused, practical and present—all earthly qualities. Compare this to many fruits, on the other hand, which grow on trees, high off the ground. They are expansive, light and airy both in their actual physical qualities and the effects they produce in the body and mind. Eating lots of tree fruits can stimulate creativity and imagination and are often favored by meditators and artists.

It should come as no surprise then that Rhodiola rosea, known commonly in many parts of the world as Arctic Root, has gained great popularity in recent decades with Olympians and endurance athletes to keep their body, mind and spirit balanced and finely tuned throughout their notoriously extreme training regimens. After all, the plant grows wildly in the extremely harsh arctic and mountainous climates found throughout Asia, Europe and Northern Canada, thriving where few other plants do.

However, Rhodiola’s impressive list of health-enhancing properties is not limited to athletes pushing themselves to the limits of human performance. Even those living more sedentary lifestyles will find great benefit from the plant, which has been the subject of extensive scientific research over the years, all of it pointing quite clearly to the fact that Rhodiola is one of the planet’s most valuable medicinal herbs.

The fact that a single plant can have such a wide variety of balancing and healing effects on the body is notable in and of itself. Rhodiola has been widely documented to boost physical performance, enhance mental acuity, alleviate depression and anxiety, elevate mood, stimulate the immune system, increase sex drive and even aid weight loss in a number of high-level studies.

But more so, it does these things in direct proportion to the actual needs of the body. According to Dr. Richard Brown, who teaches at Columbia University, Rhodiola Rosea is exceptionally beneficial because it “enhances the healing properties of one’s own nervous system.” He explains that the herb can provide both “cognitive stimulation” and “emotional calming,” depending on one’s individual needs. For example, in someone who suffers from fatigue, Rhodiola will typically provide stamina and energy, and consequently, for those who are regularly over stimulated and anxious, the plant will exert a more calming effect (without being sedating). For this reason, Rhodiola is considered to be in an elite class of herbs known as adaptogens—treasured for millennia due to their ability to restore balance at every level of the mind, body and spirit.

The Secret Plant of Olympic Athlete’s and High Performers

Rhodiola has a long and exotic history that spans thousands of years, with references to the plant first appearing in Roman times around A.D. 77 in Dioscorides’ (an ancient Greek physician) famous De Materia Medica. Legend has it that Chinese emperors would send expeditions far into the arctic regions of Asia to bring the plant back for their own personal use. In Tibet, monks have long valued Rhodiola for its ability to enhance concentration and focus. There, it is known locally as ‘Plateau Ginseng’, a name that pays homage to the high altitudes where it can be found growing wildly. References to the plant have also surfaced in Viking culture, with its use spreading widely across Scandinavia in the beginning of the 8th century and perhaps even earlier.

Until recently, the plant was relatively unknown in the West, the knowledge of which was largely kept closed off to the outside world during the Cold War with Russia, where much of the world’s supply at the time originated. Native to Siberia, Russian researchers began studying Rhodiola Rosea in earnest and not long after realized it was nothing short of miraculous. Its popularity began to spread behind the Iron Curtain, and it quickly became a favorite supplement of Russian military officers, Olympic athletes, key political leaders, international financiers, cosmonauts and master chess players, giving them an undisputed edge over their Western counterparts at the time. After the fall of the Berlin wall, knowledge of the plant began to leak out and today it is readily available worldwide. 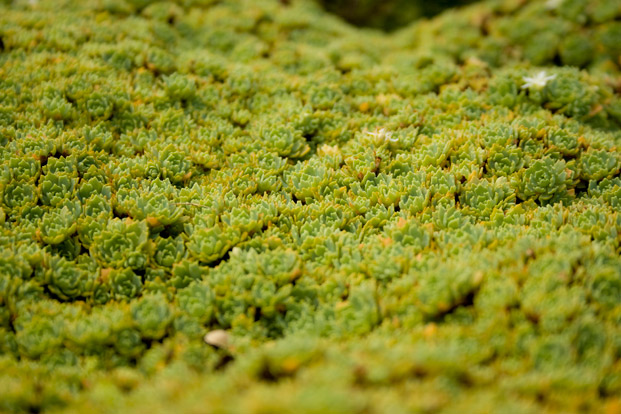 As one might surmise based on its native habitat, Rhodiola is particularly well suited for those under high levels of stress. It is one of the rare substances on the planet that has the ability to directly modulate (and specifically lower) the levels of stress hormones in the body, particularly cortisol. In fact, the plant even has the ability to protect neurons in the nervous system from stress-induced cell death, likely due in part to its ability to help the body better absorb and utilize oxygen.

Whether you find yourself working hard physically or mentally, Rhodiola offers a welcome performance boost without the crash- and-burn side effects of caffeine found in coffee and many teas. Always acting to balance the body, it also works dually well for those suffering from disturbed sleep, which is frequently tied to stress hormone and adrenal gland imbalance, both areas in which Rhodiola has measurable effects.

Many ancient texts refer to the plant as vitality enhancing, which is a metaphorical nod to its sexually stimulating properties that didn’t offend the conservative sensibilities of the times. However, anyone who has taken the plant for even a short period would be hard pressed to ignore the obvious boost it lends to libido and sexual performance in general. But this is far more than cosmetic as one of Rhodiola’s most promising uses is as a restorative for both male and female hormonal systems. Being the master regulators of nearly all functions of the body—including mood and the expression of consciousness—it is no wonder that Rhodiola has such wide-ranging effects as it does.

For those experiencing depression and other imbalances of feeling and mood, Rhodiola Rosea is a safe, natural alternative to notoriously dangerous and controversial pharmaceutical drugs. In a study among 128 adult patients with depression, treatment with Rhodiola three times a day significantly reduced or eliminated symptoms in 64% of the subjects. Contrary to SSRIs (a class of pharmaceutical antidepressants), which interfere with the brain’s natural functioning, Rhodiola enhances it, increasing blood flow and oxygen supply, which are believed to be partly responsible for its mood-enhancing properties.

Rhodiola is interesting in that there are a number of species growing across Northern climates and mountainous regions of the planet, each with different concentrations of active constituents and compounds, meaning that depending on the source, the plant may have different effects.

For example, analysis of Rhodiola growing in India, China and Bulgaria showed rosavin, rosarin and rosin, the main constituents of the plant that demonstrate medicinal effects, to be at very low concentrations compared to the heritage Russian strain. As such, the Siberian/Russian varieties are believed to be superior in terms of overall effects, and most of the products on the market originate from this area of the world.

As always with herbs, potency and purity are of utmost importance when choosing a Rhodiola product. Organic and wild-harvested/crafted Rhodiola supplements detailing the source of the herb and processing methods are recommended—of those, try to avoid standardized extracts, which although still effective, tend to upset the natural balance of the plant’s medicinal compounds.

Rhodiola has a peculiar taste that some might find unpleasant, so if you are sensitive to these types of things, capsules are suggested over tinctures and powders. That being said, the taste is not overpowering; if you are adding it to smoothies, then there is little cause for concern.

The recommended daily dose of Rhodiola rosea extract is approximately 300 milligrams depending on the concentration of the product.  As a rule of thumb, this is a good starting point to assess your body’s reaction. Rhodiola produces different effects at higher dosages, so more is not always better with this plant. We recommend starting slow and adjusting the dose to the level you find most beneficial and agreeable.

Effects can be felt immediately with Rhodiola supplements in sensitive individuals, but it is also not uncommon for it to take a few days to become noticeable. As with any herb, it is wise to take a weekend off every few weeks to give the body a rest and regain balance, although Rhodiola is generally safe to take long term for the majority of people.

Herb Pharm offers a shade-dried organic root extract of Rhodiola, grown in its native habitat in Siberia. For those sensitive to or wishing to avoid alcohol, Herb Pharm offers a vegetable glycerine-extracted product, which has a pleasantly sweet and warming taste.

Urban Moonshine offers a classic organic Rhodiola tincture, extracted using organic alcohol. Alcohol is widely used for the extraction process due to its excellent ability to absorb the medicinal compounds of the plant, along with its penetrating qualities within the body, which deliver phytonutrients deep into tissues and cells.

Herb of Intuition and Longevity: The Miraculous Health Benefits of He Shou Wu (Fo-Ti)
The Top 10 Health Benefits of Probiotic Supplements and Foods: Heal Your Gut, Feed Your Brain and Supercharge Your Immune System
Relax and Unwind With Hemp CBD: Nature's 'Chillout' Herb
Superfood From the Trees: The Incredible Health Benefits of Pine Pollen
The Extraordinary Benefits of Astragalus Root: The Ancient Herb of Longevity and Strength
7 Sacred Herbs and Foods For Boosting Your Sex Drive and Optimizing Your Hormonal Balance
Share:

Herb of Intuition and Longevity: The Miraculous Health Benefits of He Shou Wu (Fo-Ti)