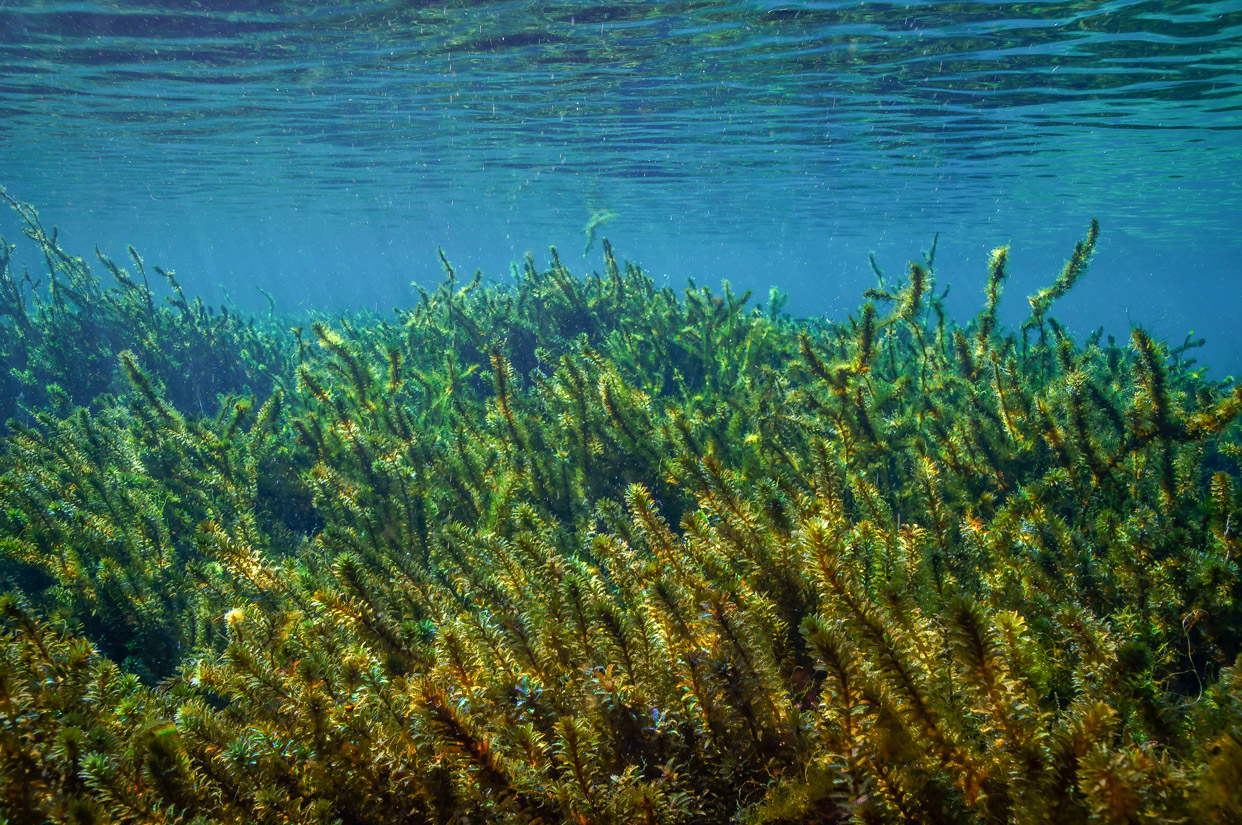 I like to think that the term superfood was coined to describe the Hydrilla verticillata plant. After all, it’s hands down one of the most nutritious foods on the planet outshining even more well-established powerhouses like

Spirulina and Wheatgrass by a long shot, which have dominated the natural foods industry for decades. Paradoxically rare and wildly abundant, it’s at once totally off the mainstream superfoods radar, yet it grows so fast and furiously in the wild (it’s one of the fastest growing plants on the planet) that there’s literally a near endless supply of it growing wildly across much of the world. It’s a tough plant. Once it takes hold in a lake, it’s very difficult to get rid of, but those same properties that make it a world-class invasive species also imbue it with a stunning nutritional profile that deserves much more attention than it currently gets.

“Hydrilla verticillata is actually the richest food source of calcium on the planet.”

Let me explain: Hydrilla is what’s known as a freshwater tape grass, meaning that it’s got a similar genetic makeup to it’s superstar superfood cousins like wheat and barley grass, but instead of growing in drier climates (relatively speaking), it thrives in lakes, streams and semi-saline estuaries. This is important for two reasons: grasses in general are easily some of the most nutritious foods known to man, hence their massive popularity as dietary supplements over the last few decades and their ability to be the sole food source of massive, thousand-pound animals like horses and cows. However, Hydrilla’s unique aquatic root structure gives it an advantage that wheat and other dryland grasses don’t have: it can siphon minerals, vitamins, and other essential nutrients from the phenomenally rich lakebed soils in which it grows, which have a distinctly different composition than those above ground. This endows Hydrilla with a very unique nutritional profile that few other foods can match.

Few know this, but Hydrilla verticillata is actually the richest food source of calcium on the planet and is similarly abundant in a host of mineral cofactors such as chromium, selenium, iron, magnesium, zinc and silica. It’s also a potent vegan source of the notoriously rare vitamin B12, as well as the rest of the B-Vitamin family, again having some of the highest concentrations of any food currently known to man. Like all whole foods, the nutrients found in Hydrilla are bound to naturally occurring carbohydrates, proteins and polyphenols in organic molecular complexes in the ideal form for human digestion and metabolism, meaning that when you consume Hydrilla your body actually absorbs and assimilates the nutrients therein (unlike the synthetic vitamins and minerals found in the majority of supplements, which cannot be fully utilized by cells). This is also in large part due to the fact that Hydrilla is phenomenally rich in a wide range of enzymes, which help the body further digest and assimilate the plant. Further research has shown Hydrilla contains a wide range of polysaccharides, widely recognized in the medical community for their immune- and general health-enhancing properties, and a rare type of molecule known as otteliones A and B, which have been shown in studies to have potent anti-tumor effects.

Hydrilla verticillata is a hardy, rapidly growing fresh water grass that pulls in essential nutrients from rich lakebed soils.  It has a mild, mineral wateresque and sometimes peppery taste.

And it’s precisely this world-class nutrient profile that explains Hydrilla’s impressively wide range of health benefits. Loaded with essential vitamins and minerals, nearly every system, gland, and organ in the body including the bones, skin, hair, and blood is either directly or indirectly nourished by the nutrients in the plant. Specifically, Hydrilla is known as a neuroprotective and neuroenhancer due to it’s high concentration of B-vitamins (particularly B12), which each play a critical role in brain and nervous system function and users often report improvements in mood, energy, and memory as the body is supplied with various cerebrally active vitamins and minerals.

The highly bioavailable calcium, magnesium, silica and other mineral co-factors supply bones, skin, nails, and hair with foundational nutrition for growth and regeneration. Hydrilla nourishes and builds blood with it’s high iron content and is a welcome source of the mineral for vegans and vegetarians, whose diets tend to be low in it while simultaneously rich in phytic acid and other iron-absorption inhibitors. It’s also an excellent source of Beta-Carotene, which is partially converted to Vitamin A and supports vision, proper gene transcription, and healthy skin cells, among other things.

“In the ancient Indian system of medicine known as Ayurveda, it’s recognized as a powerful medicinal plant.”

Hydrilla verticillata owes it’s earthy green color to its high chlorophyll content, which has a number of functions in the body including detoxification of heavy metals and building healthy red blood cells. Along those same lines, it also tends to have a mild cleansing action in the digestive tract, which stimulates peristalsis and is useful in treating constipation, and removing food waste and toxins. Hydrilla also indirectly supports the immune system by supplying many vitamins, minerals and antioxidants, which are essential for its proper functioning.

Although Hydrilla is not normally recognized as part of the Traditional Chinese Medicine pharmacopeia, by observing its effects on the mind and body, we can deduce that it is a Qi and Jing stimulating plant, which means that it not only supplies life force energy (Qi) but is also deeply nourishing and revitalizing (Jing). In the ancient Indian system of medicine known as Ayurveda, Hydrilla verticillata is recognized as a powerful medicinal plant and valued for its cleansing, restorative and energizing properties. As such, it is particularly well suited to athletes and highly active lifestyles, as well as those who are weak; in both cases its nourishing properties help to rebuild, restore, and noticeably increase endurance. Hydrilla is a staple for vegans and vegetarians due to the fact that it supplies many nutrients that are difficult to obtain in adequate quantities on those diets (iron and B12 particularly) without the introduction of synthetic vitamins or animal foods. Most use it simply as a daily tonic in smoothies and juices for its overall health-promoting effects and as an adjunct in any type of cleansing protocol for supplying nutrients and assisting detoxification.

Hydrilla is somewhat mysterious in that not much is known about its origins other than mentions of it first appearing in Indian Ayurvedic literature dating back thousands of years. It is known to have originated in Asia and in climactically favorable areas of Europe. In modern times, it is commonly found in aquariums as an ornamental plant, enjoyed by many fish who thrive off its highly nutritious leaves, subtly alluding to its medicinal effects. Perhaps this is how it was first discovered: by ancient rishis and medicine men observing the healthy and robust fish who fed on its leaves, deciding to finally try some for themselves. Either way, savvy farmers have been adding it to chicken, cow and goat feed for decades, taking advantage of its incredible nutrient profile and ability to boost egg and milk production by 20% on average.

Quality: What To Look For in Hydrilla Products

Hydrilla verticillata is widely considered by botanists to be a first-class weed, as it has no problem growing and thriving on its own without human help. As such, most products on the open market are wildcrafted, meaning they’re harvested from naturally occurring blooms in lakes and reservoirs around the world. The main determinant of quality is the purity of the air and water in the region where it’s grown, as well as the methods used for processing. Many products are heated in the drying and harvesting process, destroying temperature-sensitive nutrients, enzymes, and compounds. Look for products dried at low temperatures and ground to a fine powder for palatability and maximum bioavailability.

Depending on your personal sensitivity to herbs and foods, you may need to start slow with Hydrilla, erring on the side “less is more.” Experienced herbalists and superfood connoisseurs frequently report that the plant has an unusually high potency and kick to it, making it wise to start slow in order to let your body acclimate and adjust.

Recommended daily dosages are 1/4-1/2 teaspoon to start, up to a maximum of about a tablespoon, in smoothies, juice, spring water, or soup. Hydrilla has a mild, earthy taste reminiscent of highly mineralized water—a gentle reminder of the deeply nourishing nutrients it contains that are about to imbue your celIs. 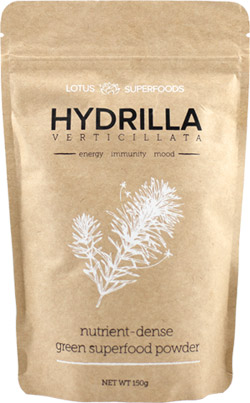 Lotus Superfoods offers a wildcrafted, raw, low-temperature milled and dried Hydrilla verticillata powder harvested from a protected reservoir in the United States.  This fine, concentrated powder is easily absorbed due to its high surface area with a mild earthy taste and fragrant scent.

Meghan McDonald is the Co-founder and Editor-in-Chief of Conscious Lifestyle Magazine. She holds a master’s degree in social psychology from San Diego State University where she conducted award-winning research into the nature of human social behavior. She is an advocate for many environmental and social justice causes and a champion of social impact-focused brands and products that adhere to high sustainability and ethical standards. As a regular travel and lifestyle contributor to Conscious Lifestyle Magazine, Meghan funnels her extensive knowledge of natural products, organic living, and consumer behavior into researching and reviewing brands and products that promote health, wellbeing, sustainability, equality, and positive social change. She has traveled to over 25 countries and loves exploring diverse destinations worldwide while documenting the local artisans and businesses offering conscious, healthy alternatives.

How to Detox Your Liver: A Complete Guide to Purifying the Body With Liver Flushing
Relax and Unwind With Hemp CBD: Nature's 'Chillout' Herb
Redefining the Effects of Stress: New Study Shows it May Actually Be Good For You
18 Simple But Powerful Ways to Overcome Stress and Get Back Into the Flow
Regenerate Your Brain: 5 Science-Backed Ways to Naturally Increase BDNF Levels and Grow New Brain Cells
Ancient Wisdom For Modern Meals: Ayurvedic Dietary Guidelines for Radiant, Lifelong Health
Share:

The Six Levels of Higher Consciousness: How to Make the Shift 211323 views

How to Master the Art of Meditation: A Complete Guide to the 10 Stages of Meditative Development 183527 views

How to Heal Your Digestive Problems Naturally 180344 views

The Art of Shifting Your Reality: 4 Deep Practices for Clearing Emotional Blockages and Harnessing the Power of Your Subconscious Mind 173904 views

The Ultimate Guide to CBD: Everything You Need to Know About the Miraculous Health Benefits of Cannabidiol 167509 views

Treating Candida Naturally: The Top 17 Most Powerful Natural Antifungal Supplements and Herbs for Ridding the Body of Yeast 164096 views

Spiritual Nutrition: How the Foods You Eat Affect Your Mind, Body and Spirit 162698 views