The Health Benefits of Dandelion Root Tea:
The Miracle Weed That Regenerates the Body From the Inside Out 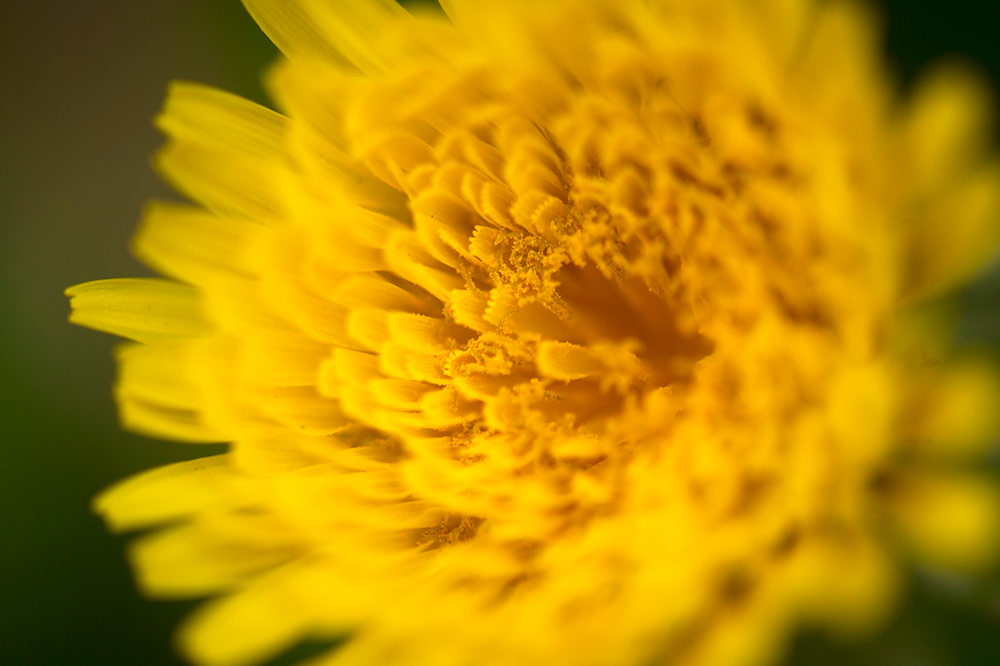 no matter how you consume dandelion, whether its as a root tea, tincture, the greens from the fresh plant or the leaves, the health benefits are extraordinary and the plant literally works to rejuvenate and regenerate your body from the inside out. photo: alcidesota

The dandelion is an herb in serious need of an image makeover. Cursed by many gardeners and those in quest of perfect lawns, dandelion is frequently viewed as a pest plant. If you walk past my home, you’ll know it from the dandelions that grow rampant on the front lawn. While my neighbors continue to douse

the yellow flowers with harmful pesticides, I prefer to let the resilient and prevalent flowers grow. That’s because, in addition to dandelion’s excellent nutritional and health benefits, it has scientifically proven medicinal properties and an extensive history of use. Research is increasingly showing its benefits for fighting cancer, preventing osteoporosis, treating Alzheimer’s disease, and much more.

A Brief History of Dandelion

An Arab doctor first recorded dandelion’s curative properties in the tenth century. Dandelion was once called “piddle bed” because of its ability to increase urine flow. The French have a less tactful name for the plant as well: pissenlit. En lit means “in bed.” I’ll leave you to figure out the rest.

As far back as 1880, studies showed that dandelion is an effective treatment for hepatitis and swelling of the liver. Another German study proved that dandelion root helped alleviate jaundice and reduce gallstones. Newer research shows that dandelion root protects the liver against some harmful toxins, such as carbon tetrachloride, which is used in some cleaning products and building materials.

I probably don’t have to give you any advice on how to grow dandelion, other than to avoid using pesticides and to cut your grass less often. By cutting your grass less frequently, you’ll increase the likelihood that the yellow dandelion flowers will go to seed (forming the familiar puffball heads). When that happens, the wind disperses the seeds and helps ensure that more dandelion plants grow in your yard.

Both the roots and the leaves of dandelion can be harvested. Regardless of which you are using, be sure to gather them from an area free of pesticides and lawn sprays. Be cautious even about harvesting from your own lawn unless you live away from traffic and are confident of the land’s organic status.

Dandelion greens taste best when they’re young and tender. As they grow, they become increasingly bitter. To harvest the roots, conversely, look for large plants. I’ve found it easiest to harvest the roots after a rainfall, when the ground is still soft and the roots come out whole.

The Health Benefits of Dandelion Roots and Greens

Dandelion greens benefit both the urinary tract and liver, while the root works primarily on the liver. Most of the studies on the effectiveness of dandelion use dandelion root tinctures or dandelion root or leaf tea. In my experience, tinctures tend to be more potent than tea. Dandelion root is also available commercially in powdered or capsule form. You can make a decoction using two teaspoons of powdered dandelion root per cup of water. Bring to a boil and simmer for forty-five minutes. Make a large enough batch of tea to ensure that it won’t just evaporate during the cooking time. Drink one cup of the dandelion root tea three times daily. Another option is to take one teaspoon of alcohol-based dandelion tincture three times daily.

Dandelion root has been traditionally used in the treatment of liver disorders like jaundice, and increasing amounts of research support this use. Some health professionals recommend dandelion root tea for people taking antidepressant medications, since these drugs can impede the liver’s detoxification pathways. Research in the Journal of Medicinal Food shows that dandelion also helps protect the liver against damage from other drugs, including painkillers like acetaminophen.

If you plan to use the root to give your liver a boost, a typical dose is 500 to 2,000 mg of dandelion root in capsule or tea form, taken daily for two weeks.

Dandelion contains a substance known as alpha-glucosidase, which is nature’s blood-sugar reducer. It has been used for many years to treat diabetes. People with diabetes should work with a physician to monitor their blood sugar levels, because dandelion root tea is so effective that it frequently helps people reduce their medications.

In a study published in the journal Molecules, researchers found that animals given dandelion had a reduction in fatigue and a boost in immunity.

When it comes to weight loss, dandelion is virtually unmatched, in large part due to its effects on the liver. Dandelion root boosts liver function and increases the rate of fat metabolism in two ways: first, it stimulates the liver to produce more bile to send to the gallbladder, which helps burn fat, and second, it causes the gallbladder to contract and release its stored bile, further increasing fat metabolism. I usually recommend drinking dandelion in tea form to aid weight loss. Not only can dandelion root and leaf stimulate the liver to burn fat, it can also help reset our hormone balance so we stop storing as much fat, heal our cells to increase our energy levels, and speed up our metabolism so that weight
melts off.

Dandelion’s greatest therapeutic promise may lie in its ability to fight cancer. One of the most exciting studies about dandelion’s anticancer properties was published in the journal Evidence-Based Complementary and Alternative Medicine. Canadian scientists found that after forty-eight hours of exposure to dandelion extract, cancer cells begin to die off. The study also found that dandelion was effective on cancer cells that were resistant to chemotherapy. Another study, published in the International Journal of Oncology, found that a tea made from dandelion leaves decreased the growth of breast cancer cells, while a tea made from dandelion root blocked the ability of cancer cells to invade healthy breast and prostate tissue. In another study published in the online medical journal PLoS One, researchers found that an extract of dandelion root was able to selectively and efficiently kill cancer cells without toxicity to healthy cells. They concluded that natural products such as dandelion root have “great potential as non-toxic and effective alternatives to conventional modes of chemotherapy available today.” According to a study published in the journal Molecular Carcinogenesis, one of the ways that dandelion root seems to fight cancer is by making tumor cells more susceptible to the natural process known as apoptosis, which causes cells to essentially commit suicide. This study also found that dandelion root seems to increase the effectiveness of other cancer treatments used alongside it.

In a study published in Advances in Hematology, researchers found that dandelion significantly increased both red and white blood cell counts, making it a possible aid in the treatment of anemia, blood purification, and immune system modulation.

Recently researchers have added the role of superbug killer to the dandelion’s impressive health-boosting résumé, showing it to be effective against the bacteria E. coli, Bacillus subtilis, and MRSA.

Next to cabbage, dandelion shoots (the stems, leaves, and flowers) have the highest amount of the bone-building mineral boron. According to James Duke, ten grams (just under seven tablespoons) of dried dandelion shoots provides over one milligram of boron and two hundred milligrams of calcium. While that might sound like a lot of dandelion, keep in mind that drinking it as a tea makes it much easier to ingest. In addition, calcium in this form is much better absorbed than from other sources like dairy products.

Dandelion flowers are one of the best sources of the nutrient lecithin, which, among other functions, increases the amount of the neurotransmitter acetylcholine and helps improve memory.

Dandelion root is a powerful diuretic, which means that it increases the production of urine. Increased urination helps flush out bladder bacteria, making dandelion root tea valuable in the treatment of bladder infections. 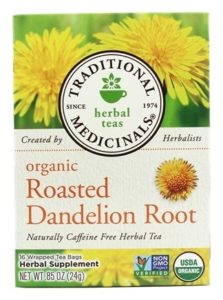 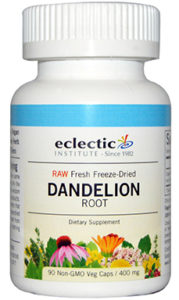 Eclectic Institute offers an ultra-fresh, sustainably wildcrafted (grown wildly in nature) root that is freeze-dried at peak potency for extra freshness. This is a more powerful and concentrated form of Dandelion formulated for maximum health benefit and effectiveness.

Gaia Herbs offers an ultra-high-quality, organic dandelion root and leaf tincture which gives you all the benefits of both the root and leaf, which each have unique medicinal, healing, health-boosting properties.

Chop raw dandelion root into small chunks, and roast it in a 200°F oven for 1 to 2 hours. Longer cooking times produce a darker roast taste. Remove from the oven, and allow the root to cool. Grind it in a high-powered blender or coffee grinder, and store in an airtight glass jar.

Dandelion greens contain blood-building chlorophyll, which gives them their deep green color. They also contain bitter compounds that can help cleanse the liver. You can steam, sauté, or juice young dandelion greens. I love them chopped and sautéed with minced garlic and olive oil, then topped with fresh lemon juice and a dash of unrefined sea salt.

This delicious pumpkin-spice latte is much lower in sugar than commercial varieties of the beverage and free of artificial ingredients. If you prefer a sweeter drink, simply increase the amount of coconut sugar used. You can serve it hot or iced, depending on your preference. Serves 2.

This piece on the health benefits of dandelion root tea is excerpted from the book Be Your Own Herbalist: Essential Herbs for Health, Beauty and Cooking. Copyright © 2016 by Michelle Schoffro Cook, Printed with permission from New World Library. newworldlibrary.com

Michelle Schoffro Cook, PhD, DNM, is the author of Be Your Own Herbalist: Essential Herbs for Health, Beauty and Cooking and a certified herbalist and board-certified doctor of natural medicine. She holds advanced degrees in health nutrition, orthomolecular nutrition, and acupuncture. She lives, and grows her own food and herbal medicines, near Vancouver, BC, Canada. Her websites are DrMichelleCook.com and HealthySurvivalist.com.

Gotu Kola: The Many Benefits of the Ancient Herb of Enlightenment and Longevity
Eating Healthy on a Budget: How to Get Ultra-High-Quality Organic Food and Supplements For Half The Price
The Cellular Connection to Longevity: Telomeres, Aging and the Keys to Lifelong Health [Excerpt From the Telomere Effect Book]
Just CBD is Nature’s Answer to Anxiety, Stress and Pain
Mucuna Pruriens: The Mood Boosting Superherb
7 Sacred Herbs and Foods For Boosting Your Sex Drive and Optimizing Your Hormonal Balance
Share:

How to Master the Art of Meditation: A Complete Guide to the 10 Stages of Meditative Development 206714 views

The Health Benefits of Deep Breathing: 9 Ways it Supercharges Your Body and Mind