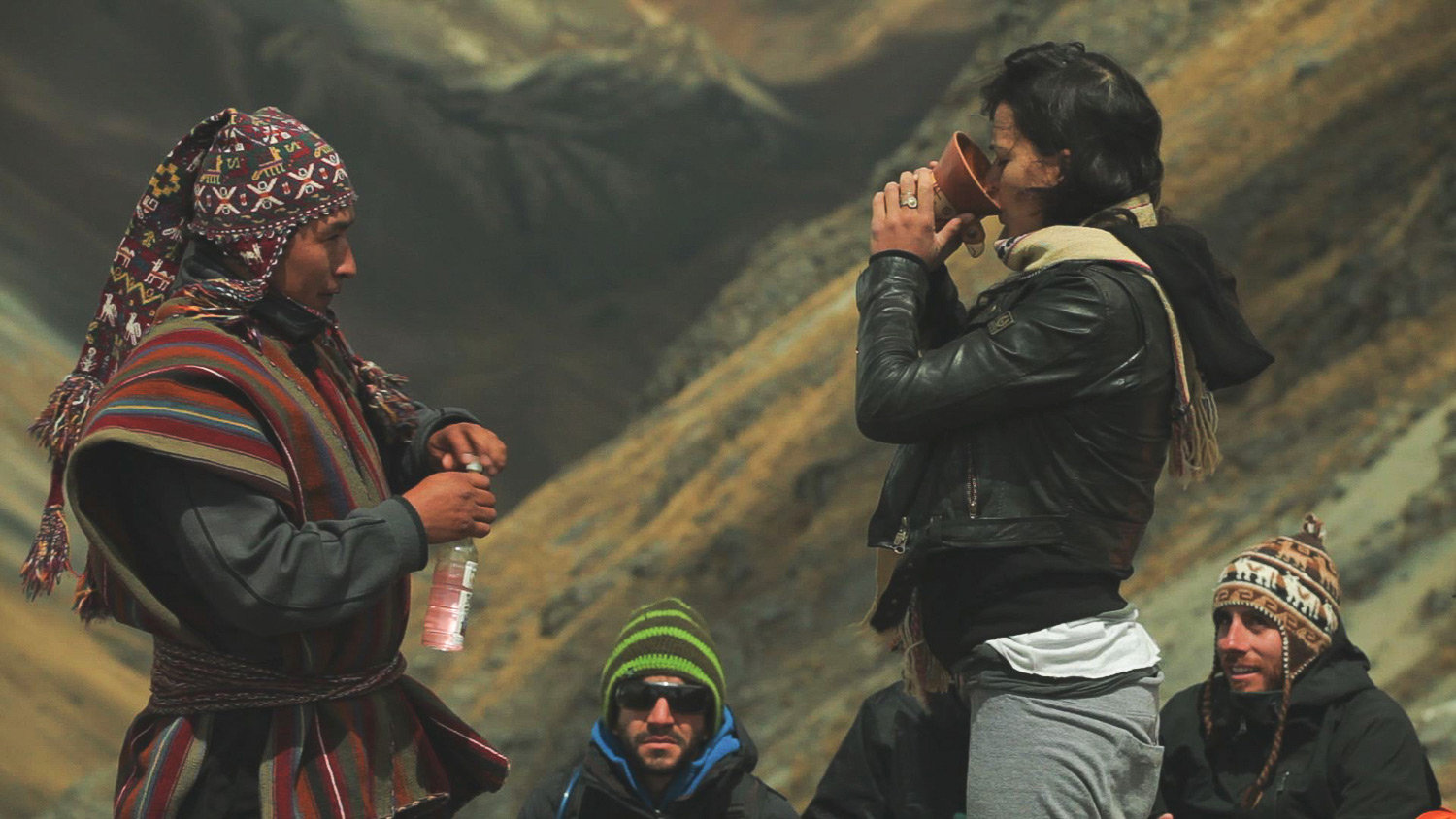 michelle rodriguez participates in an traditional plant medicine ceremony under the guide of a watchful shaman. photo: the reality of truth

The Reality of Truth is a new documentary film directed by Laurent Levy and written by Mike “Zappy” Zapolin. The film documents Zappy’s search for deeper, existential meaning as he travels to the Amazon to partake in a psychedelic ritual.

The documentary opens with a volley of important questions that many of us ask ourselves: what is reality? Do any of us, even those of us who are successful in life and economically affluent, really know?

How do we connect with the spiritual dimensions of our being—for our health, healing and growth—in a materialist society that so glorifies material wealth and affluence as the end-all, be-all?

The Book of Exodus describes a “small round thing”, the “Manna” to be eaten. The Rig Veda references the sacred “soma”, a mysterious plant used for ritual and visionary experience. Zappy starts the film narrative with a phone call to Deepak Chopra to discuss some strange, and controversial, Biblical references that allude to the use of psychedelics. Did ancient civilizations ingest psychoactive substances (we know this to be true, in many cases)?

If so, Zappy asks, can we use these substances, along with other altered states of consciousness, to help modern society?

In many ways, this documentary answers that question with a resounding yes.

More so through a deeply personal, sometimes harrowing journey with plant medicines, Zappy and his fellow “psychenauts”, meaning “sailors of the mind”, come to understand how important it is to tend to these inward vistas.

Some of the most compelling parts of this documentary featured thought leaders and spiritual teachers, like Marianne Williamson, John Hagelin, Bruce Lipton, Ram Das, and Sri Sri Ravi Shankar.

Each teacher presents their own take on the deep questions, but if there was a general consensus, it was our society’s materialism isn’t the end-all, be-all—reality is beyond materialism.

Beginning with an exploration of meditative states, Zappy learns about the power and effectiveness of Transcendental Meditation (T.M.) developed by guru Maharishi—the same teacher who became known for being the “spiritual advisor” to The Beatles—and the widespread cultural adoption and interest in contemplative practices.

What was particularly striking was Christian author and heavy hitter Joel Olsteen’s casual admission, in Zappy’s interview, that the “Manna” in the Bible was probably a mushroom!

There are many gems in the documentary that I will leave the reader to discover for themselves, but it’s through these profound conversations with modern wisdom teachers that Zappy receives varied—even sometimes conflicting—opinions on how psychedelics might fit into our lives.

Some, like Marianne Williamson, see psychedelics as a temporary glimpse of the “mountaintop.” Some recommend using them only at at certain levels of spiritual attainment. Others, such as a medical professional, can’t recommend them yet, but foresee their legitimate usage in therapeutic settings for end-of-life care. Still others in this section boldly advocate psychedelics that a single session with some psychedelics can rival “ten years of psychotherapy”.

Ultimately, a conversation with Ram Das catalyzes Zappy to take that leap of faith and travel with his friends to Peru for a plant medicine ceremony.

San Pedro, “Huachuma”, is a drink made from the San Pedro cactus, used in the Andean region for religious ceremonies for over 5,000 years. Ayahuasca, as more and more people are finding out, is an tryptamine-based plant medicine from the Amazon made out of a combination of two different plants.

In the Ayahuasca ceremony, Zappy confronted his personal fears around death and discovers how “dynamic” death really is. It also yielded total cosmic visions of universal balance and the sheer joy.

Michelle Rodriguez shares some of the deep pain and loss that the San Pedro helped her to let go. Her Ayahuasca trip also helped her to accept—and even embrace, at a spiritual level—the traumatic loss of her friend and The Fast and the Furious series co-star Paul Walker.

After their trip to Peru, the group touches base again with Deepak to reflect on their inward journeys.

Zappy learns Sri Sri Ravi Shankar’s Sudarshan Kriya breathing practice to continue to integrate his plant medicine experience. He is amazed by the ability of Sudarshan Kriya to alter his state of consciousness and, as Sri Sri mentions, it can be done at will. As someone who has personally learned this form of kriya from Sri Sri’s Art of Living retreats, I can attest to the potency of pranayama, or breathwork, to shift consciousness into a dynamic, beautiful and receptive state.

Gerard Powell, who let Deepak and Zappy film together in his beach house, ended up taking the advice of Deepak and trying plant medicine, too. Facing a downward spiral of substance abuse, he traveled to Costa Rica in the hopes that Iboga—a powerful psychoactive plant from Central Africa—might help to cure his addiction.

During a visionary, healing journey, Gerard uncovered a childhood memory of traumatic sexual abuse. He was able to heal—literally given a new heart by the spirit of the plant medicine—and went on to found the Rhythmia center. Rhythmia: Life Advancement Center is a medically licensed resort in Costa Rica, a convergence point of exactly the kind of breathing techniques and plant medicines Zappy has been exploring in this film.

There are a series of profound connections between Gerard’s experience, Zappy’s quest for answers to our deepest spiritual questions, and that first conversation with Deepak.

But you’ll have to watch it yourself.

And find out where this story intersects with yours.

We’re at an amazing moment in culture. In history. Politics seem worse than they’ve been in a long time. But, more than ever before, our culture is waking up to the potent, entheogenic (literally meaning the divine within) allies of plant medicines and other altered states to transform their lives.

These allies, when understood properly—as the San Pedro shaman Fredy Puma mentions in the film—can become powerful aids as we work to actualize a personal and collective transformation; but we must be willing to take those next big steps. It cannot take us all the way.

The Reality of Truth sets the stage for the next step. It asks the viewer, it asks you: what will that be?

Learn more and watch the film for free here: https://therealityoftruth.com

The Conscious Travelers Guide to Israel: A Journey Through the Holy Land
6 Unique Healing Gifts for the Conscious and Spiritual People in Your Life
Earth Art: Surreal Images of the Planet Like You’ve Never Seen It Before
Getting Rid of Negative Energy: 20 Powerful Practices for Cleansing and Clearing Your Energy Field
Cosmic Dreams: The Art of Devany Amber Wolfe
The Hidden Meaning of Coincidences and How to Create More of Them in Your Life
Share:

Spiritual Nutrition: How the Foods You Eat Affect Your Mind, Body and Spirit 183326 views