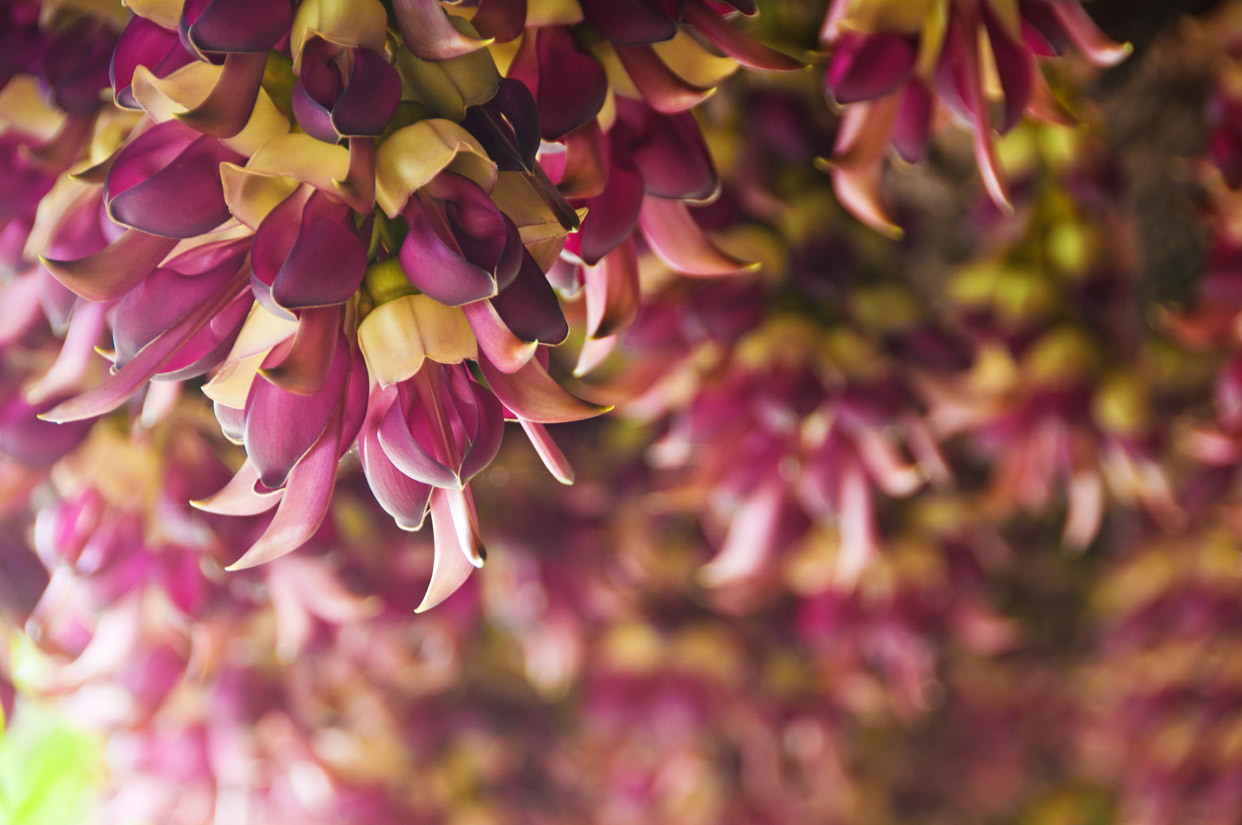 At first glance it would seem that the Mucuna Pruriens plant was doing everything in it’s power to keep from being eaten. After all, it’s covered in thousands of tiny hairs known to cause intense pain and itching in those unlucky

enough to be stung. But for anyone tenacious enough to pry a pod of the Velvet Bean plant open, there lies great reward inside.

Tucked away in the caterpillaresque pods of the climbing Mucuna vine lie one of nature’s most unusual and interesting medicinal beans. Like coffee, Mucuna Pruriens is psychoactive, but in a far more medicinal and absolutely non-addictive way. Fortunately the aggressive pods are only something you’ll need to worry about if you insist on heading to the equatorial jungle regions, where the plant grows wildly, and harvesting it yourself. Mucuna has gained substantial popularity in recent years, and it is now widely available in health food stores and many places online in a perfectly safe, although still quite potent form.

But what exactly is Mother Nature hiding inside those pods that makes it worth all the trouble? Well, for starters, Mucuna Pruriens is one of the only naturally occurring (and certainly most concentrated) sources of L-Dopa—as in dopamine. In fact, Mucuna is so rich in the dopamine precursor L-Dopa that it is used as an alternative treatment for Parkinson’s disease, which is believed to be caused (in part) by a lack of the essential neurotransmitter. With 7% to 10% by weight, Mucuna Pruriens is a powerful natural source of dopamine, and serotonin, and tryptamine… and just about every other mood-influencing neurochemical known to man. Seriously. This is the closest thing that exists to a natural, safe non-addictive antidepressant or mood enhancer (depending on how you prefer to look at it… glass half full, half empty, no?).

“Mucuna Pruriens is one of the only naturally occurring (and certainly most concentrated) sources of L-Dopa—as in dopamine.”

With all those mood-enhancing, pre-hormonal natural neuropeptides floating around in the Velvet Bean pods, it also doubles as a powerful aphrodisiac. The high concentrations of L-Dopa cause the brain to release dopamine, in turn stimulating the pituitary gland to produce human growth hormone, which promotes muscle growth, increased strength, and has been proven to raise levels of testosterone. Mucuna also simultaneously lowers levels of prolactin, which can reduce menstrual discomfort and associated weight gain in women and increase sperm motility, and hence fertility, in men. 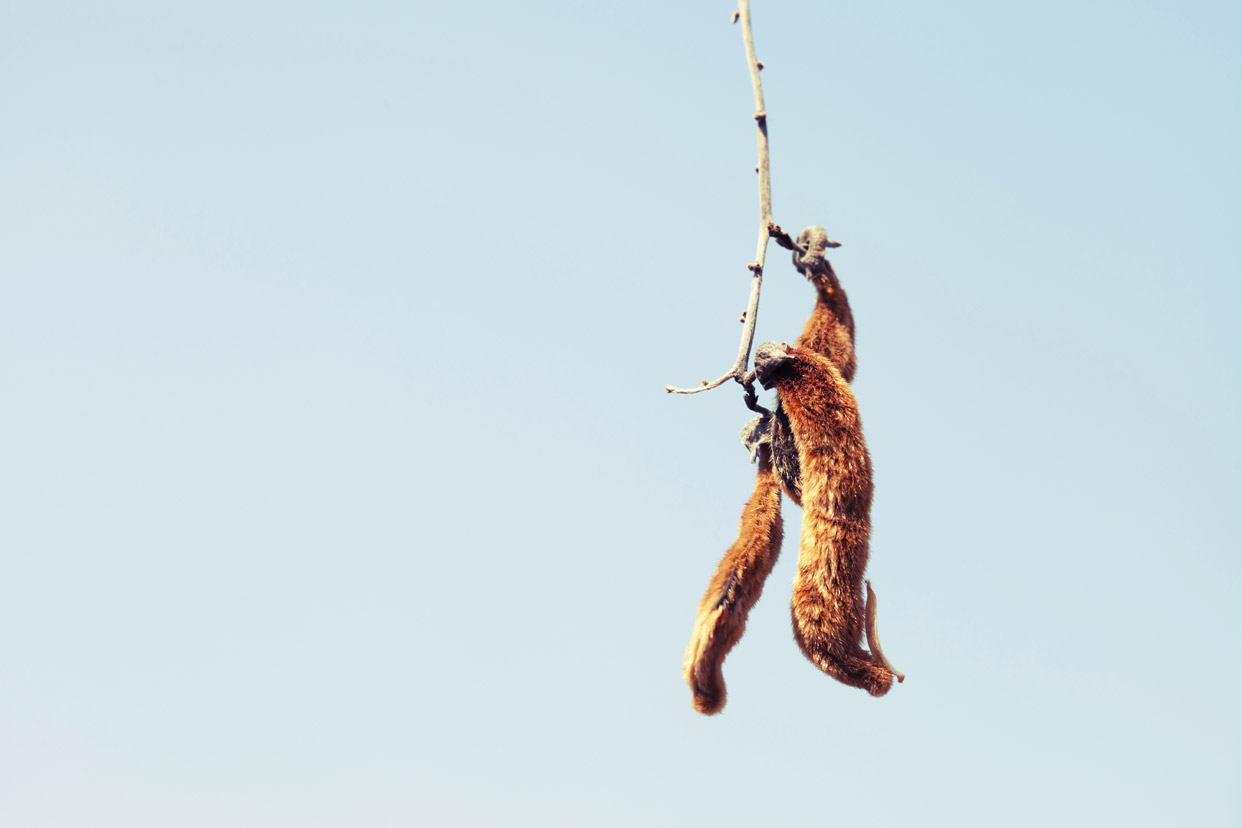 spiky velvet bean pods of the mucuna pruriens plant hiding their prized, hormonal and psychoactive beans within. mucuna vines are actually quite common in many parts of the world and their beans have been long used as a food and medicine. photo: shutterstock

Mucuna Pruriens is classified as a jing enhancing herb in the Daoist herbal tradition, which means that it is nourishing at the most fundamental levels to the body. Jing loosely translates to “vital essence” or “life force” and in the case of Mucuna, can clearly be understood in terms of its restorative effects on the brain, nervous, and hormonal systems. Jing is believed to be depleted as we age, so plants like Mucuna that act to replenish it are prized in many herbal traditions.

In the ancient Indian system of Ayurvedic medicine, Mucuna Pruriens is widely respected as a powerful anti-inflammatory and purifying herb, and it is frequently used for treatment of arthritis and general pain relief, as well as blood purification, and even in the rare case of snakebite, parasites, or other types of poisoning in addition to all of the previously mentioned uses.

But perhaps the most interesting property of the Velvet Bean is its content of exotic compounds such as dimethyltryptamine (DMT), 5-MeO-DMT, nicotine, and bufotenine in trace amounts, which just happen to be the active ingredients in such sacred medicinal plants as ayahuasca, tobacco, and peyote, among others. While Mucuna Pruriens is most definitely not a psychedelic plant on its own (it can easily be purchased at your local health food store), it clearly does share many interesting properties with them, albeit in extremely minute quantities. For this reason, it is safe to classify Mucuna as a particularly spiritual and consciousness-enhancing plant. DMT, for example, is secreted by the pineal gland, which is the master regulator of consciousness in the body and is believed to control our perception of time as well as our circadian rhythms (sleep/wake cycles). In fact, many who take Mucuna Pruriens report more vivid dreams and deeper sleep with regular use but often times after just a single dose.

“Regular consumption of Mucuna Pruriens will have a gentle balancing effect on the brain and hormonal systems.”

Regular consumption of Mucuna will have a gentle balancing effect on the brain and hormonal systems associated with such powerful compounds. For this reason it is often used in cases of depression and anxiety, which may be in part related to the depletion of these essential neurotransmitters.

Indigenous cultures worldwide consume Velvet Beans as an integral part of daily life. In Central America it is used to this day as a coffee substitute and in certain areas of Guatemala as a staple food in tribal diets. The beans are also immensely popular throughout India and Southeast Asia. In fact, nearly every tropical culture on the planet uses Mucuna Pruriens in some way, either medicinally, ornamentally or as food in daily life; however, when used as food, the Velvet Beans undergo a special process to remove much of their psychoactive compounds, as large doses can cause unwanted effects. Even without these compounds, the Velvet Beans of the Mucuna Pruriens plant are rich in amino acids, making them a useful vegetarian source of protein.

Most often in the West, Mucuna is sold as a dietary supplement with its medicinal compounds intact either in pill or powder form. Like anything with a powerful psychoactive effect, Mucuna is best used sporadically or situationally as needed for restorative purposes. The 2:1 rule of two weeks on one week off is a reasonable dosing schedule, although long-term usage is still considered generally safe. Like everything in life, it is about balance.

Quality Mucuna Pruriens is orange-brown in color and has a slightly bittersweet, smoky caramel flavor, which makes it a delicious addition to many recipes or simply taken straight up in a glass of lukewarm water. For maximum medicinal effects, it is best to take Mucuna away from food.

As with any herb, quality, potency, and purity are of utmost importance. Always choose organic, biodynamic or wild-harvested Mucuna Pruriens whenever possible. Mucuna often is standardized to various concentrations for more precise and controlled dosing due to its high levels of powerful medicinal compounds. However, full spectrum extracts are always a good choice as well and most closely mimic the natural balance of the plant.

As with any new herb, it’s best to start slow with Mucuna and work up to higher doses until you understand how your body reacts.

Note: Pregnant women and persons on pharmaceutical anti-depressants or hormonal modulators of any kind should consult with their physician or naturopath before using Mucuna Pruriens. 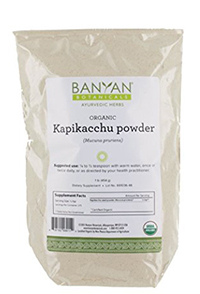 Banyan Botanicals Mucuna Pruriens extract powder (of which the traditional Sanskrit name is Kapikacchu) is an organically grown, ultra-pure and highly concentrated powder providing high levels of L-Dopa and other synergistic plant nutrients and medicinal compounds.

Himalaya Herbs offers convenient, pure, additive-free organic Mucuna pruriens caplets as an extract of both the bean and stem, standardized to 6% L-Dopa.

Banyan Botanicals offers an organic Mucuna pruriens extract in non-gmo, gluten free grain alcohol. Alcohol is an ancient herb carrier fluid that is deeply penetrating and tends to increase the absorption of the herb in the body.

The Extraordinary Benefits of Astragalus Root: The Ancient Herb of Longevity and Strength
The Keys to Healthy Teeth: Research-Backed Natural Remedies For Repairing, Strengthening and Whitening Your Teeth
Superfoods for Your Skin: Gypsy Juice Organic Skincare Gives You the Glow
Tulsi (Holy Basil): The Sacred Indian Superherb That Harmonizes Your Mind, Body and Spirit
12 Incredible Uses and Health Benefits of Activated Charcoal Powder: The Great Purifier
Beauty From The Inside Out: The 22 Best Foods For Glowing, Healthy Skin
Share:

Kitchen Medicines: 10 Delicious Medicinal Foods That Belong in Every Kitchen